A recent  art school graduate, Jason (name & other personal details changed for privacy) was intensely frustrated with life after college, which seemed to lacked meaning. Employed by a web agency, he used most of his creative energy up doing graphic design for corporate clients during the day, rendering charcoal sketches inspired by the works of H.R. Giger in his free time.

“I don’t get it,” he complained. “This is what I always wanted to do, but I feel aimless and I’m bored to death! Even my personal artwork is tiresome to me, all of these black and grey aliens and tentacles and stuff… I wish I was inspired to try something different!”

“Have you ever tried exploring a different medium, maybe something that relies a little bit more on chance and whimsy, like collage? Or maybe dreams – have you tried keeping a dream journal?” I asked.

“My gosh, no,” he replied. “I don’t even remember what I dream about most of the time. Do you think I should?”

“Couldn’t hurt to try,” I shrugged. “So what’s your favorite outdoor activity?”

“I REALLY enjoy canoeing,” he replied. “I don’t know why, it’s just so peaceful.”

Taking that as my cue, I lead him through a brief induction, giving him permission to relax every muscle in his body, from the tips of his toes to the top of his head. When he had fully entered a trance state, I guided him verbally on a canoe trip down a river.

“You can just let the river take you,” I said. “Or you can paddle in any direction you want. If you get tired, it’s very easy to pull over to the bank and anything you need is right there, waiting for you. Light a fire and eat some food, if you like; or simply lay down under a tree and take a nap. This is your river and you have permission to explore it at your own pace.”

With an expression of pure pleasure on his face, he seemed to sink into an inner world which I was loathe to disturb, but as the hour drew near, I realized that it was time to count him back out.

“How do you feel?” I asked. “Good,” he replied, “but I don’t really remember what we talked about. Is that normal?”

“For some people, yes. That’s fine though, it just means your subconscious accepted the suggestions on a deep level. See how you feel tomorrow.”

The next day he called me to report an astonishing event:

“I was taking a shower this morning getting ready for work and all of a sudden I started bawling! I remembered a dream I had last night that was so powerful it seemed completely real – realer than where I’m sitting right now!

I was canoeing down a river and I was holding on to a florescent orange ball that I knew was important for some reason. At some point  I hit white water and I  got washed out of the boat and lost my orange ball. I was struggling to swim to the shore, but when I got there, you were already there waiting for me. You reached down, pulled me out of the water, handed me the orange ball and told me that it was mine to keep and I would never lose it again.”

“Well, I was driving to work, right? And I saw an orange ball exactly like the one in my dream by the side of the road, like one of the promotional things that Dunkin’ Donuts gives out! I pulled over and snagged it right away, I have it in my pocket right now!”

“Hmmm,” I replied. “That’s incredible. What does it mean to you?”

“I don’t know, actually,” he said. “But you know, I have been thinking a lot recently about quitting my job and moving to Venice Beach and just freelancing. I’m good enough at design that I can find clients on my own and I’d really rather have the freedom to be able to surf during the day.”

Jason called me a month later from his new apartment in Venice Beach to let me know that his freelance business had taken off and he was happier with his life than he’d been in a long time.

While he never did pick up collage, he had begun experimenting using color in his sketches, branching out from monochromatic aliens to watercolor paintings of tourists on the boardwalk.

No further sessions were required. 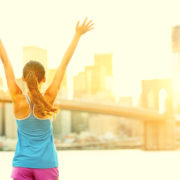 Pay via Paypal or Venmo

PRIVACY NOTICE: This information will never be shared
Close this popup